The development plan for Norwich

1.1      The development plan for Norwich is made up of a number of policy documents which will guide and manage development in the city (see figure 1). This includes:

1.2      The development plan is supported by a number of procedural documents, setting out our timetable for producing it (the Local development scheme), how we will consult people about it (the Statement of community involvement) and how successfully it is being implemented (the Annual monitoring report and other regular monitoring reports).

1.3      In Norwich, local planning policies are set out in two separate local plans. This document, the Site allocations plan, contains detailed, site specific policies and proposals for individual change sites, and will operate alongside the DM policies plan, which sets out general policies to guide development across the whole city.

1.5      The NCCAAP, which was adopted by the city council in March 2010, covers one of the areas identified for significant urban regeneration and change in the JCS. There are a number of sites allocated separately in the NCCAAP. These sites form part of the development plan as a whole and are therefore shown on the Policies map (city centre inset) apart from one site at Sussex Street which is currently being developed.

1.6      Under the provisions of the Localism Act 2011, local communities now have the opportunity to independently prepare their own neighbourhood plans. At present there are no neighbourhood plans being developed in Norwich. If produced, such plans will be required to be in general conformity with the strategic objectives of the JCS and to explain their relationship with the policies and proposals in the Site allocations and DM policies plans. The role of neighbourhood plans is discussed in more detail in the introduction to the DM policies plan. 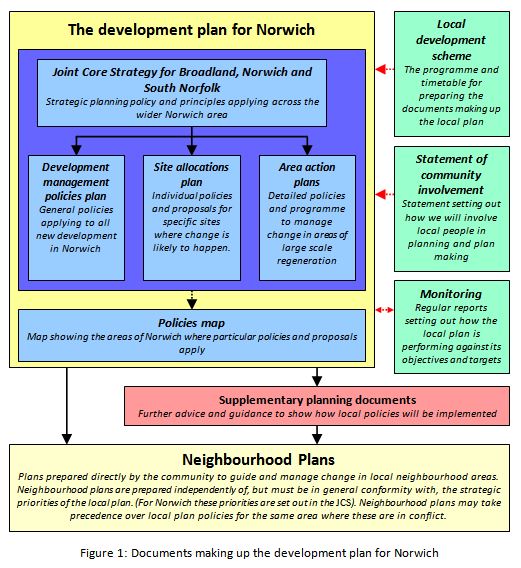 Purpose of this plan

1.7      The purpose of the Site allocations plan is to ensure that sites are identified and made available to meet the development needs of Norwich in accordance with the policies and proposals set out in the adopted JCS, and must also align with the policies of the DM policies plan. The Site allocations plan sets out detailed policies and proposals on sites where change is anticipated or proposed, and sets out preferred land uses for those sites including housing and employment. In common with the other key planning documents referred to above, this plan has an end-date of 2026.

1.8      The JCS sets out the council’s vision, objectives and strategic policies on important issues such as housing, employment and shopping. Its spatial planning objectives are derived from the Sustainable community strategies for each of the three districts and are in brief:

1.9      In developing this Site allocations plan, the council has considered different options for potential sites, carried out a number of public consultations, and undertaken sustainability appraisal and appropriate assessment. This is further explained below in chapter 3 (‘Site selection’).

1.10    This plan allocates a total of 73 sites for development in the plan period for a mix of uses. Land is identified sufficient for in the region of 3,142 new homes and seven hectares of additional land reserved for employment and business uses. The housing sites are in addition to sites already allocated, but not yet developed, through the City of Norwich Replacement local plan (adopted 2004) and the NCCAAP (adopted 2010).

1.11    During the lifetime of the plan (to 2026), proposals for new development or redevelopment will come forward not only on sites allocated for development in this plan, but also on a number of other sites within the plan area which may come forward in the future, but whose exact location cannot be determined at this time. There will also be small scale development opportunities on sites which are too small to allocate individually. Such unplanned development is known as windfall development. Norwich has a high level of windfall housing development, which has averaged 37% of housing completed over the period 2001 – 2013. The requirement in the JCS for Norwich to find additional land for at least 3000 homes only takes account of those sites which can be allocated in this plan and does not include an allowance for windfall development. However, the contribution of windfall sites to achieving the housing target for Norwich is nevertheless expected to remain fairly significant over the plan period, though perhaps diminishing over time as a proportion of the total housing built.

How to use this document

1.12    This document sets out in chapter 2 the national and local policy context for the proposed site allocations, and in chapter 3 explains the process by which the council has arrived at the final set of allocations.

1.13    This document should be read in conjunction with the DM policies plan, which sets out proposed planning policies for the city council area, and informs the content of the proposed site allocation policies, and the NCCAAP, which makes site allocations in that area which are not included in this plan. Policies and proposals from this Site allocations plan, the DM policies plan and the adopted NCCAAP are all illustrated on a combined Local plan policies map which accompanies this document.

1.14    The following table shows the key changes in the development of the Site allocations plan.

1.15    Published alongside this Site allocations plan are the following documents:

1.16     A series of background topic papers and technical studies provide further evidence and explanatory material to support and justify the plan’s policies and proposals.

It should be noted that in comparison with previous drafts of this plan, the terms Development Plan Document and DPD have generally been replaced by local plan throughout the plan text and also in its title, following the recommendation of the Planning Inspectorate. The terms have however been retained where they occur within the body of policies.