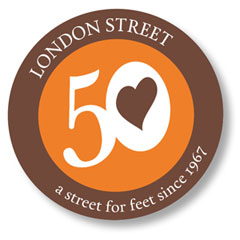 On 17 July 1967, London Street became the first shopping street in the UK to be pedestrianised. It started a revolution that saw people given priority over traffic in city centres.

To mark the 50th anniversary, a series of posters will be on display in shop windows along London Street, which show its history from the turn of the 20th Century into ‘a street for feet’ in the late 1960s.

Following the closure of London Street to traffic, Norwich made more of its city centre pedestrian-friendly with further schemes. The map below shows how this approach has been added to over the decades, right up until the most recent Transport for Norwich project to pedestrianise the Westlegate area.

Latest figures show that making the city accessible for walking and cycling is good for passing trade to businesses, with footfall up in Norwich by 2.2 per cent, against a fall nationally of 1.1 per cent.

This video shows the ceremony at which the Lord Mayor of the time, Cecil Sutton, formally close London Street to traffic and was joined by his wife in tying, rather than cutting, a white ribbon. They then walked the length of the street followed by other officials of the day.

Pedestrianisation and London Street in particular was also the subject of one of the ‘Look at Life’ series of short documentaries, which ran in cinemas throughout the 1960s.

The anniversary comes just as the Transport for Norwich project to pedestrianise Westlegate has been completed. The same approach discussed in the video of removing traffic to increase footfall and passing trade still applies today.

The Norwich Society has produced a booklet on the history of the pedestrianisation of London Street to mark the 50th anniversary. Click on the link below to download a pdf copy.

To find out more about The Norwich Society, please visit www.thenorwichsociety.org.uk