The Intergovernmental Panel on Climate Change (IPCC) report ‘Global Warming of 1.5°C, released in October 2018, found that limiting global warming to 1.5°C would require reductions of global human-caused emissions (Carbon Dioxide) of 45 per cent by 2030, and reach net zero by around 2050. If the average global warming was limited to 1.5°C, it still worsens the risks of drought, floods, extreme heat and poverty for hundreds of millions of people.

Average global warming is 1°C already when compared to pre-industrial averages. At 2°C, the upper limit of the UN Paris Agreement, the risk of negative impacts of climate change increase significantly. Global carbon dioxide emissions currently show no signs of peaking and are expected to hit a record high in 2020/21, despite urgent calls from climate scientists, the United Nations and others.

Energy pathways that could limit global warming to 1.5°C require rapid and far-reaching transitions in energy, land and infrastructure – including transport, buildings, farming, businesses and industry. This transition is unprecedented and requires deep emission reductions in all sectors of society. 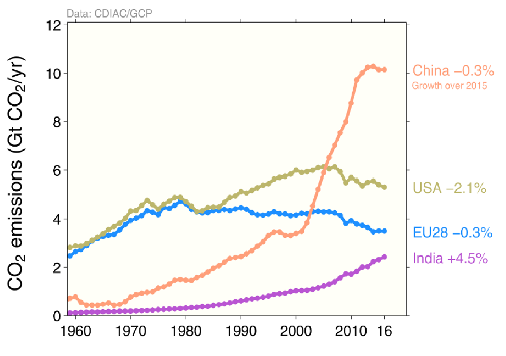 The UK was the first country to introduce long-term, legally-binding national legislation to tackle climate change. The 2008 Climate Change Act provides the UK with a legal framework, including a new net zero target for carbon emissions by 2050. It also includes five-yearly ‘carbon budgets’ (limits on emissions over a set time period, which act as stepping stones towards the 2050 target), and the development of a climate change adaptation plan.

The new net zero target fully meets the requirements of the Paris Agreement, including the stipulation of ‘highest possible ambition’, and sets the standard for other developed countries as they consider their own pledges towards this global effort in emissions reduction.

Current UK emissions constitute only a small percentage of the global total, but those who say the UK’s actions no longer matter are wrong. Every ton of carbon counts in the atmosphere, wherever it is emitted. In setting a net zero target, the UK will be among a small group of countries viewing climate change with appropriate urgency and importance.