The Sheriff of Norwich for 2021-22 is Caroline Jarrold . She was formally elected at the mayor-making ceremony in St Andrews Hall on Monday 24 May 2021. 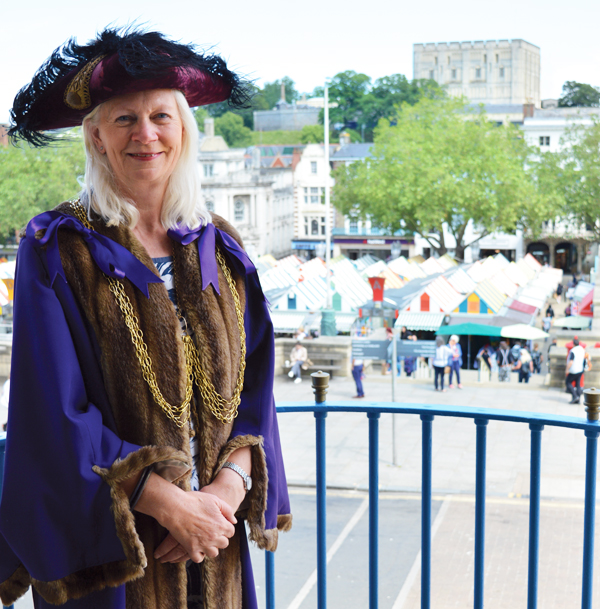 Caroline’s day job is community affairs adviser at Jarrold & Sons Ltd based in Norwich. As part of this role, Caroline is secretary to, and a trustee of, the John Jarrold Trust.

Caroline has worked for the company for more than 35 years and is one of the seventh generation of the family to be involved in the business. During this time, she’s worked within the printing and publishing divisions (now no longer part of the company) and in the retail division during university holidays, before taking up her current group role.

Jarrold is now best known for its flagship department store in the centre of Norwich. It has other retail branches in Cromer and Wymondham, in addition to The Granary and Jarrold Sport in Norwich. Beyond this, the company has a major Norwich development site at Barrack Street and a thriving training division.

In Caroline’s role, she has contact with a wide variety local charities and educational organisations and was a founder member of the Norwich & District Funders’ Forum.

Caroline is a trustee/director of the following organisations:

Previously, Caroline served as Chair of VisitNorwich and the Norfolk & Norwich Festival for many years and was a member of the Board of Norwich University of the Arts before it became a university in its own right; as well as various other organisations.

Caroline is also a member of the advisory board for the University of East Anglia’s (UEA) business school, sits on the development committee for the Britten Sinfonia, is an ambassador for the Sainsbury Centre for Visual Arts and a patron of the Norfolk & Norwich Festival, the Hostry Festival and YMCA Norfolk.

Caroline has been a judge for the East Anglian Book Awards, since they were founded in 2008 and an active member of the Norfolk Punt Club (sailing club based at Barton Broad).

The UEA awarded Caroline an honorary doctorate in 2017 and she was appointed a Deputy Lieutenant of Norfolk in 2018.

Waltraud Jarrold, Caroline’s mother, was instrumental in setting up many of the twinning arrangements between Norwich and Koblenz, a tradition Caroline has carried on through Norwich Philharmonic Society – which has had regular exchanges with the Musik Institut Choir in Koblenz since 1983.

Caroline speaks good German and passable, if rather rusty, French.

Caroline is married to Nicholas Dixey – who serves as her consort – and together they have three children – Max (25), Felix (23) and Louisa (19).

The Lord Mayor and Sheriff receive many invitations to  events and functions – ranging from formal openings to school or hospital visits, fundraising events for their chosen civic charity and small community projects to official visits from other dignitaries – attending up to 500 throughout the year.

Request the Lord Mayor or Sheriff to attend your event.