The Lord Mayor of Norwich for 2022-23 is Councillor Dr Kevin Maguire. He was formally elected at a mayor-making ceremony at City Hall on Tuesday 24 May 2022. 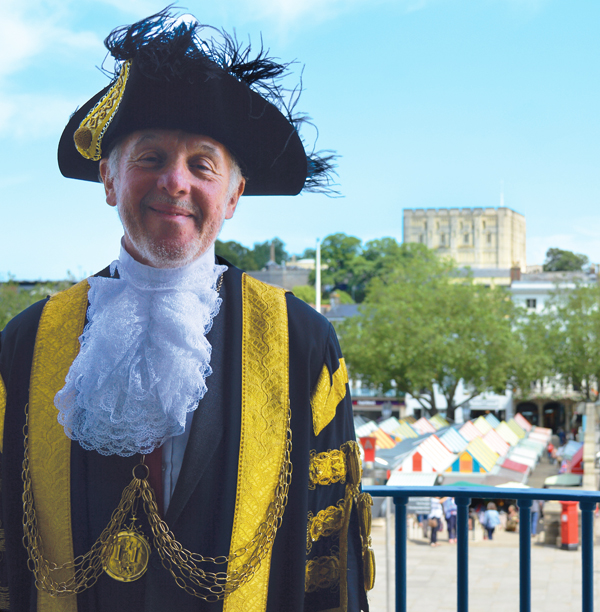 Kevin, like many, came to Norwich to study at University of East Anglia (UEA), and stayed.

At UEA, an aspiring ecologist found student politics irresistible and decided that he should work in public service – to do his bit to make the environment a better and safer place to live.  After marrying Liz – a Nurse with the Norfolk and Norwich Hospital – they moved to London, where Kevin trained as an environmental health officer with the City of Westminster. With the birth of their first child, it was time to move back to Norwich and so Kevin worked at South Norfolk District Council, then Norwich city, during which time their three other children were born.

Investigating an industrial accident led Kevin to ask why it had happened: this took him on a journey of retraining as a work and organisational psychologist, and then teaching at Nottingham Trent University – commuting daily for 18 years, and living there for six.  Liz lived with cancer for twelve years, but he lost her in 2007.

All his research has been in areas of psychology’s contribution to worker health and safety: this included stress studies among a number of professions including personnel officers, fire-fighters, clergy, and catering chefs – where he identified and wrote about “the kitchen crescendo” as things literally hotted up in the kitchen. Still looking for the most powerful causes of ill-health and injury among workers, he found cultural practices to most often be at the root. His doctoral (and post-doctoral) studies have remained in this area; he looked at how cultural forms affected a worker’s approach to keeping safe: professions studied include tunnellers in a coal-mine, building workers on a large civil engineering project, and police officers working in a child protection unit.

Partial retirement allowed him to stand, and be elected, for Wensum ward in 2016 and then full retirement a year later allowed him to join Norwich City Council’s cabinet with a portfolio involving the environment. He was selected as the next Lord Mayor for 2020 but the pandemic had other ideas.  He eventually took up office for the civic year 2021-2022, and was elected to serve for a second civic year in May 2022 – his term extended due to the limits the pandemic placed on his initial year.

The Lord Mayor and Sheriff receive many invitations to  events and functions – ranging from formal openings to school or hospital visits, fundraising events for their chosen civic charity and small community projects to official visits from other dignitaries – attending up to 500 throughout the year. If you are organising a local event or launch you may wish to request the Mayor's attendance. Request the Lord Mayor or Sheriff to attend your event.