The site includes the eastern part of the former Jarrolds printing works site and the site of the former housing fronting Barrack Street. The site is 2.81 hectares in size. It is now cleared and largely used as temporary surface car parks. It contains the remains of the historic city wall, a Scheduled Ancient Monument.

This is a large site which sits in an ‘edge of city centre’ location just inside the inner ring road and is surrounded by a wide range of uses. The site contains the newly developed offices of Dragonfly and Kingfisher House with an area of surface car park to the east, which was also formerly part of the printing works site. Further east is a leisure centre with associated car parks and housing development on the riverside. This site is adjacent to the Whitefriars / Barrack Street site, which is also part of the former Jarrolds printing works and is allocated in this plan under policy CC17b. These sites are being treated separately in this plan as they are physically separated by the line of the city wall, have separate access arrangements, and have different site constraints.

The site offers an important opportunity to bring forward an accessible office led mixed use development in the city centre. It will be important that housing is provided within the scheme to encourage sustainability and easy access for people from home to work.

The city wall lies to the west of the site and the design of the development should enhance the setting of this scheduled ancient monument, potentially with a public square close adjacent to the city wall. Since the site is adjacent to the City centre conservation area development should take into account the recommendations in the City Centre Conservation Area Appraisal, including to:
• maintain, enhance and create river footpaths;
• maximise the views across, from and of the river;
• retain the existing embankment line and historic features and enhancement of river access.
A strategic cycle route runs from the new bridge in an easterly direction towards the leisure centre and on to the inner ring road via a toucan crossing. A proposed new route will run from the new bridge along the river in a westerly direction and up past the city wall to meet the inner ring road at the Silver Road junction. This should be integrated into the site layout design. The design should also integrate river access, riverside walk and appropriate landscaping along the river.

The entire site falls into Flood Zone 2 whilst a small part of the land adjacent to the river is in Flood Zone 3a and the site is also over 1 hectare in size. Therefore a flood risk assessment is required for this site and appropriate mitigation measures must be provided as part of the development. The site may also be subject to possible contamination.

The site lies adjacent to the River Wensum. A written consent from the Environment Agency is required for proposed works or structures, in, under over or within 9 metres of the top of the bank of a designated ‘main river’. It is recommended that developers engage in early discussions with the Environment Agency.

An archaeological assessment will be required prior to development.

Development should take into account some mature trees on the borders of the site mainly fronting Barrack Street and the River Wensum.

The site has planning permission for redevelopment to include offices, retailing, residential units, a hotel and associated parking spaces. The site is suitable and available for development.

Land at  Barrack Street is allocated for a comprehensive mixed use development to include:

Subject to viability, development could also include a hotel as part of the mix. 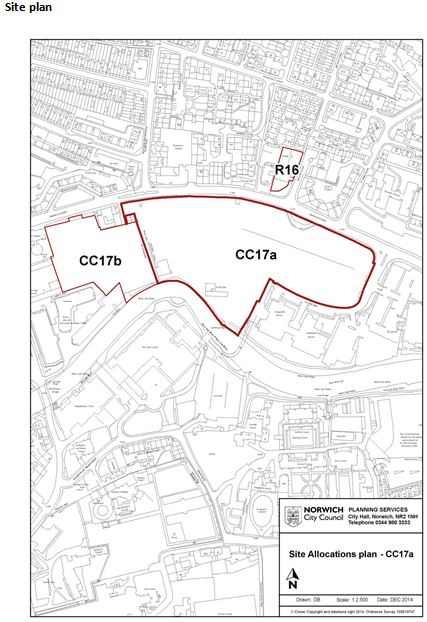