The site is 0.18 hectares in size and is located on the western side of Ber Street. The site is currently occupied by garage buildings and parking.

There are a number of listed and locally listed buildings in the vicinity of the site along Ber Street, Finklegate, and to its rear at Notre Dame School.

Ber Street has been a major route out of the city since at least the 12th century, and is thought to have originally been a Roman road. Its use as a cattle drove to the old cattle market adjacent to the Castle is reflected in its unusual width. Today, following bomb damage during the Second World War and subsequent redevelopment, the street is fragmented in character, with remnants of its earlier character apparent but with much mid 20th century housing. The area is predominantly residential with some office development, and other commercial uses along Ber Street.

Redevelopment of this site for housing will help deliver the wider policy objectives of the JCS by contributing to the improved vibrancy of this part of the city centre, helping to strengthen the city’s sub-regional role, and by helping to achieve its target for new homes.

Development of the site must address a number of constraints including its location with the City Centre Conservation Area and the Area of Main Archaeological Interest, site ground conditions, possible contamination, and its location near to the wooded ridge.

The redevelopment of the site provides an opportunity to sensitively regenerate this part of Ber Street, contributing positively to the character of the street.

The site is suitable for around 20 dwellings, and is also potentially suitable for commercial, offices, and/or educational uses. Development must be enhance the setting of the neighbouring listed and locally listed buildings and reflect its location in the City Centre Conservation Area, in line with the City centre conservation area appraisal. Its design must re-instate a strong building line along the street frontage, whilst respecting the area’s important topography.

An archaeological assessment will be required prior to development.

This site is suitable and available for development within the plan period.

The site at 147 -153 Ber Street is allocated for housing development (a minimum of 20 units). Commercial, offices, and/or educational uses may also be acceptable.

The development must be designed to : 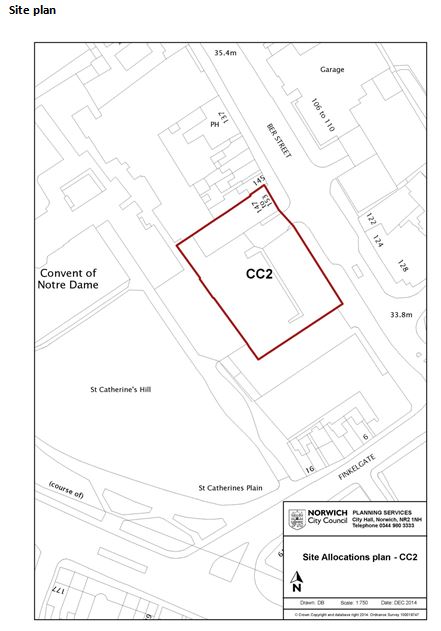