This brownfield site of 0.23 hectares was occupied by housing prior to the Second World War and is currently in commercial and garage uses. It consists of functional single and two storey warehouse and workshop buildings and surface car parking. It lies within a mixed residential, industrial and commercial area of the city centre.

The site is bounded by Oak Street to its west and Sussex Street to the south. St Martins at Oak Wall Lane, next to the former line of the city wall, which lies within an open space, is to the north and flats are to the east.

The adopted NCCAAP identifies the Oak Street North sub area within which the site lies as an area of change and shows a number of opportunity sites for potential redevelopment within it but does not allocate this site specifically. Policy LU3 of the NCCAAP requires housing development outside the core area of Anglia Square to provide at least 50% of units suitable for occupation by a family with children.

This site provides the opportunity for new housing on a brownfield site with excellent access to jobs and services in the city centre and neighbouring shopping facilities at Anglia Square/St Augustine’s/Magdalen Street Large district centre.

The City centre conservation area appraisal identifies the site as being part of the “Northern Riverside” area of the city centre, in which former industrial and commercial uses are steadily being converted to or replaced by housing. The Oak Street area north of the ring road is particularly identified as a major development opportunity.

As a result, redevelopment of this site represents an opportunity to reinstate the historic building line along Sussex Street and Oak Street and provide an improved setting for the city wall, which is situated in close proximity on both sides of Oak Street and is a scheduled ancient monument. In addition development may need to address possible contamination issues.

Access to the site should be taken from Sussex Street.

The site is owned by Norwich City Council and is suitable and available for development.

The site (0.23 hectares) is allocated for housing for a minimum of 15 dwellings, with at least 50 per cent of units for occupation by families with children.

Development must take account of its location close to the city wall Scheduled Ancient Monument. 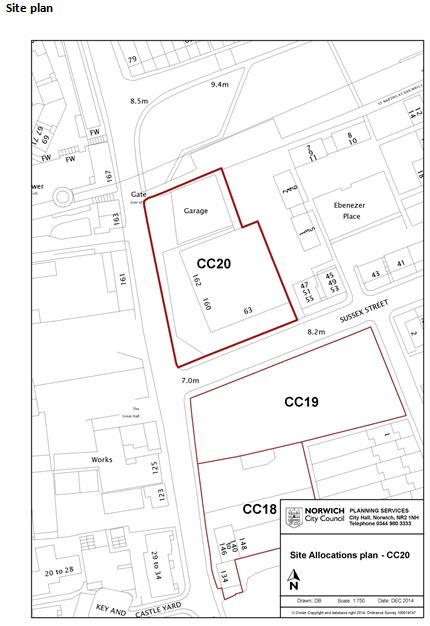