The site is 0.18 hectares in size and located in the southern part of the city centre. It was most recently occupied by Mecca Bingo. The building was demolished in 2014.

The site is located on All Saints Green, opposite John Lewis department store and a group of listed buildings identified as a positive frontage in the City Centre Conservation Area. Overall, however, the character of the street is fragmented due to the lack of continuous street frontage and juxtaposition of historic buildings with newer ones.

This part of the city centre is characterised by groups of good 18th and 19th century houses. These are now mostly dominated by office uses and their settings are largely dominated by the late 20th century office developments of considerable scale.

The JCS identifies the Stephen’s Street area (which this site falls within) as an area of change; it states that the St Stephens area will be developed for mixed uses in accordance with its masterplan, to promote retailing, offices and housing and to create an improved pedestrian environment.

The site is promoted in the outline St Stephens Street area outline masterplan as part of the Surrey Street mixed use quarter. Redevelopment of this site for office use will help deliver the wider policy objectives of the JCS by improving employment opportunities in the city centre, and provides an opportunity to enhance the character of the street and the public realm.

Development of the site must address a number of constraints including its location in the City Centre Conservation Area and Area of Main Archaeological Interest.

Its location means that the site has the potential to be a high density development. The masterplan sets forward indicative proposals for the site including provision of 6,200 square metres of office floorspace, with a building height of 5 storeys overall, two of which should be set back from the road to mitigate the height of the Aviva building to the rear.

Given its location in the Area of Main Archaeological Interest, the site will require an archaeological assessment prior to its development, together with a photographic record of the building prior to demolition, where original features may remain. In recognition of the local community history value of the site, heritage interpretation would be appropriate on the site.

The site is suitable and available for development within the plan period. The building has recently been demolished.

The site formerly occupied by Mecca Bingo at All Saints Green is allocated for high density office development.

Design of the development should be consistent with the approach as set out in the St Stephens Street area outline masterplan. 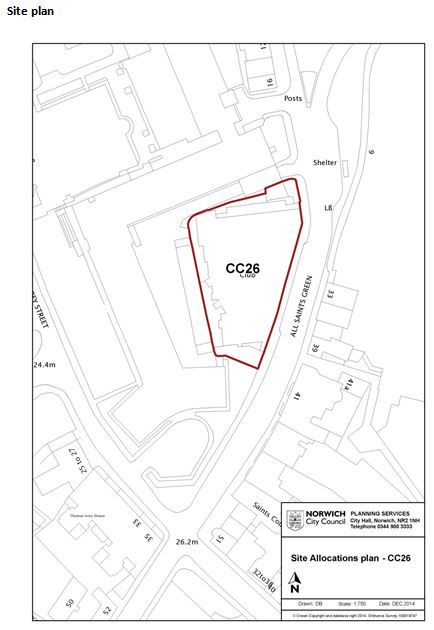