The former Eastern Electricity Board (EEB) site is located on the south bank of River Wensum and is 0.84 hectares in size. The site contains the vacant electricity buildings along the river and the former Boardman buildings fronting Duke Street. The site has two main vehicular access points, from Duke Street and Westwick Street. The site frontage on Duke Street and adjacent to the river is identified as ’positive’ in the City centre conservation area appraisal.

The site borders existing residential development on the west side. Duke Street is part of the city's one way system.  Adjacent to and south of the site are 1-25 Charing Cross which is dominated by professional services, including estate agents and law firms. In the middle of the site is a large open space which is currently in use as a temporary car park.

The riverside area has been the focus of activity for most of Norwich’s history and contains remnants of its former importance. Today, the focus of this activity has shifted from industrial concerns to leisure pursuits and the area is rapidly becoming a popular residential location with many new developments currently underway or in the pipeline.

Office led mixed use development of this derelict site will support the city centre’s employment role and bring the site back into productive use, helping improve the vitality of this part of the city centre. The site is suitable for either conversion or full-scale redevelopment, involving demolition of existing buildings. The Employment sites and premises study (2008) identified this site as having the potential to deliver Grade A office floorspace in the city. Therefore, a significant element of office development would potentially address the future demand of office floorspace in the city centre as identified in the JCS. Given its sustainable location the site is also suitable for other uses, including an element of residential, small scale retail, and possible food and drink uses.

Development of the site must take account of its constraints which include its location adjacent to the River Wensum and inclusion in flood zones 2 and 3, its location in the City Centre Conservation Area and Area of Main Archaeological Interest, possible contamination, access, site levels and scale of adjoining development and buildings.

The site lies adjacent to the River Wensum. A written consent from the Environment Agency is required for proposed works or structures, in, under, over or within 9 metres of the top of the bank of a designated ‘main river’. It is recommended that developers engage in early discussions with the Environment Agency. Part of the site falls within flood zones 2 and 3. A flood risk assessment is therefore required and development should not take place without appropriate mitigation measures.

Design of the development must be of high quality, respecting adjacent buildings and its riverside setting. In particular it must respect the setting of listed buildings adjacent to the river, and maintain views of the grade II listed building which is part of the former Bullards Brewery site to the west, and long distance views of St Margaret’s Church. A strong frontage to Duke Street and the river should be created or reinforced. The design of development must also include landscaping to enhance its appearance and setting. Development proposals that retain and convert the building on the Duke Street frontage will be given favourable consideration. Demolition would need to be clearly justified on the grounds of the quality of any new development, although demolition of the former Eastern Electricity Board offices is likely to be acceptable

The scheme should be designed to be permeable providing links through the site from Westwick Street to Duke Street at Duke’s Palace Bridge, as well as providing for the riverside walk (subject to demolition of the building fronting the river).

An archaeological assessment will also be required prior to development.

Prior approval for 69 dwellings has been granted, under Part 3, Class J, of the Town and Country Planning (General Permitted Development) Order 1995 (as amended).

The site is however being actively promoted by the developer and the policy allows a degree of flexibility over uses to facilitate the delivery of development on this site.

The Duke’s Wharf site is allocated a mix of uses including offices, and potentially:

Uses falling within Class D1 (non-residential institutions) and hotel use may also be acceptable on this site.

Development may include either the conversion of existing buildings or redevelopment. The scheme should be designed to integrate with the surrounding area and to provide links through the site from Westwick Street to Duke’s Palace Bridge, as well as providing for the riverside walk along the northern boundary if existing buildings are demolished. 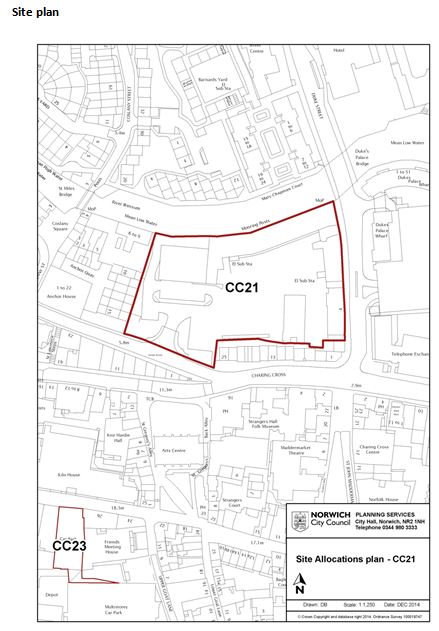