The site is 0.19 hectare in size and is located on the eastern side of Ber Street at its junction with Horns Lane. The site is currently occupied by a temporary retail unit occupied by a cash and carry retail shop and another building fronting Ber Street, and includes open space to the rear, currently used for staff and customer parking. The site also includes part of the Ber Street escarpment, which forms a wooded ridge on Richmond Hill, a prominent natural landscape feature and an ecological link in the Wensum Valley.

There are a number of listed and locally listed buildings directly opposite the site on the west side of Ber Street.

Ber Street has been a major route out of the city since at least the 12th century, and is thought to have originally been a Roman Road. Its use as a cattle drove to the old cattle market adjacent to the Castle is reflected in its unusual width. Today, following bomb damage during the Second World War and subsequent redevelopment, the street is fragmented in character. There are remnants of its earlier character, together with much mid 20th century housing. The area is predominantly residential with some office development, and other commercial uses along Ber Street.

Redevelopment of this site for a mix of uses including residential, offices and retail will help deliver the wider policy objectives of the JCS by contributing to the improved vibrancy of this part of the city centre and strengthening the city’s sub-regional role.

Development of the site must address a number of constraints including its location with the City Centre Conservation Area and the Area of Main Archaeological Interest, its location adjacent to wooded ridge referred to above, and ground conditions including possible former chalk workings on the site.

The development of the site provides an opportunity to deliver a vibrant mixed use site fronting Ber Street, which will contribute positively to the character of the street, and will remove two ‘negative’ buildings which currently detract from its streetscape and character.

The site is suitable for around 20 dwellings as part of a mixed use development, with some retail development, ideally along the Ber Street frontage, and / or an element of office development. Development must enhance the setting of the neighbouring listed buildings and reflect its location in the City Centre Conservation Area. Its design must re-instate a strong building line along the street frontage, whilst respecting the area’s important topography. Development must retain and enhance the wooded ridge for biodiversity.

This site is owned by Norwich City council and is suitable and available for development within the plan period.

The site at 60-70 Ber Street is allocated for redevelopment for a mix of uses including:

Access to the site will be from Horns Lane.

The development must be designed to: 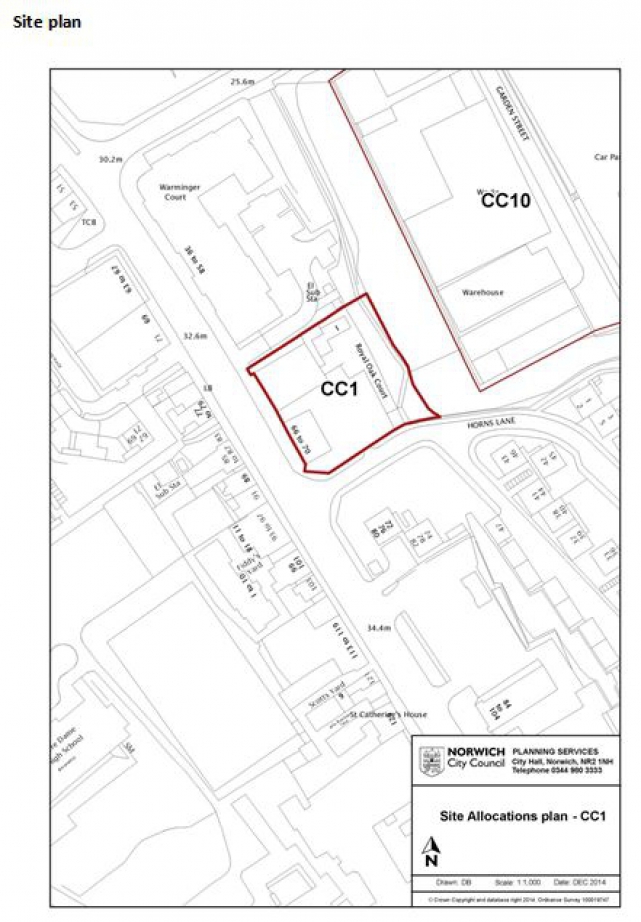