Site specific allocations in the remainder of the city

This site of 32.2 hectares is the largest and only significant greenfield housing development opportunity in Norwich. Located on the western edge of the city, this extensive site has been identified as a strategic development allocation in local plans for a number of years and forms parts of the third and final phase of the major planned urban extension at Bowthorpe which has been under periodic development since the late 1970s.

The site lies to the south of Earlham Green Lane and Clover Hill Road and to the north of the River Yare. The principal approach from the south by road is from the B1108 at Colney via the existing river bridge, Tolgate Way and Dodderman Way. The site adjoins parkland adjacent to Bowthorpe Hall and conservation area, existing residential development within the first phase of Three Score to the west and Bunkers Hill Wood and St Mildred’s Road in West Earlham to the east.
The site slopes from north to south and consists mainly of uncultivated grassland used for informal recreation and as pasture for horses. There is a curved tree belt running from the northern to the eastern boundary and a small wooded hollow in the north-west part of the site. Hedgerows are an important feature along Earlham Green Lane and also in the south-west part of the site, which includes a green track defined by a double hedgerow forming an L shaped route running from the eastern edge of existing housing areas in Three Score and turning south toward the river. A network of more informal tracks has become established across the site.

Three Score is a city council owned site which has been a long-established strategic housing allocation in the City of Norwich Replacement local plan and its predecessors dating back to the original Bowthorpe masterplan (1974).

Three Score has potential to provide a significant amount of housing, including affordable housing, in a new community well linked to the rest of Bowthorpe and Norwich. It is close to the Bowthorpe district centre and employment opportunities at the Bowthorpe employment area and the Norwich Research Park.

Local services should be provided in a village centre, including community facilities, local shops and employment uses.

The new Three Score community is proposed to be an exemplar scheme which will provide a sustainable and energy efficient development of exceptionally high quality intended to drive up standards of design and place making in similar developments in future.

The design of the development must respect the setting of Bowthorpe Hall and its conservation area, preserve the open character of the Yare valley and maintain strategic long views.

Environmental Impact Assessment, biodiversity appraisal, archaeological investigation, a geotechnical study and utilities report and a flood risk assessment will be required for this site.

Planning permission has been granted for redevelopment of the site for 1,000 dwellings, a care home, a new village centre, public open space and associated new roads and infrastructure.

The site is in single ownership and is suitable and available for development within the plan period.

The site at Three Score, Bowthorpe (32.2 hectares) is allocated for development as a sustainable urban extension primarily for housing, providing in the region of 1200 dwellings, with associated community facilities, recreational and informal open space, green infrastructure and an integrated network of vehicular, pedestrian and cycle routes through the site. 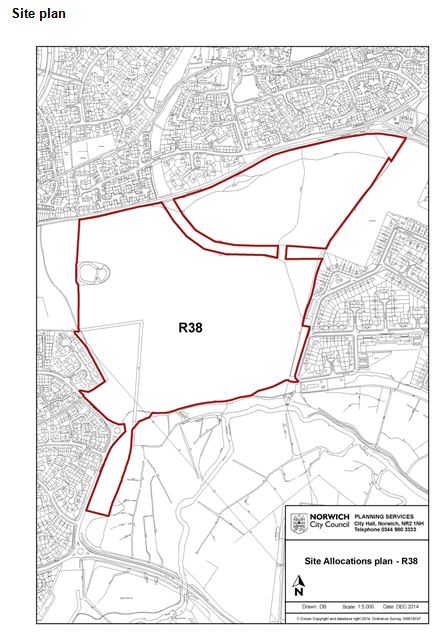