Site specific allocations in the remainder of the city

The Deal Ground comprises an extensive area of disused former industrial land and buildings on the south-eastern fringe of Norwich situated between the main Norwich-London rail line and the confluence of the rivers Wensum and Yare. The majority of the site has been tipped to raise its level: the lower lying eastern edge of the site adjoining the River Yare (including Carrow Abbey Marsh) falls within the river valley and is largely rural in character. Adjoining the site to the west is an operational minerals railhead and asphalt plant, situated alongside the railway. This railhead site is safeguarded under policy CS16 in the adopted Minerals and Waste Core Strategy (September 2011). The railhead currently receives the majority of crushed rock delivered for Norfolk. It benefits from deemed consent and is not subject to any restrictions to operating hours, noise limits etc. The asphalt plant has the benefit of permanent planning permission (ref C/4/2010/4003), which contains conditions regarding noise limits, operational hours etc.

Vehicular access to the Deal Ground is currently taken from the south from Bracondale using an indirect and substandard route adjacent to Trowse Pumping Station. Further to the east, beyond the city boundary, are Whitlingham Country Park and the open river valley landscape beyond, which is within the Broads National Park.

The Deal Ground extends partly into South Norfolk. The area at the extreme eastern end of the site at the confluence of the two rivers falls within that district and accommodates Carrow Yacht Club. The area within Norwich which is allocated for development in this plan excludes the eastern half which will remain protected as part of the river valley and county wildlife site designation around the marsh. The site contains the grade II listed Bottle Kiln. The allocated development area extends to approximately 8.1 hectares.

Any planning applications for the Deal Ground site may need to include, or be accompanied by, an application for bridges over the River Yare connecting to the May Gurney site in South Norfolk. The land to the south of the site – the former May Gurney site – is currently in the same ownership as the Deal Ground; any application on this land will likely be determined by South Norfolk council.  Any bridges over the Wensum would require applications to both Norwich City council for the bridge footings and to the Broads Authority for the bridge span.

To the north of the Deal Ground, on the far side of the River Wensum is the Utilities site which is allocated for mixed use development in this plan under policy R10.

The Deal Ground is one of three adjoining and closely related strategic regeneration sites in east Norwich, the other two being the Utilities site on the north bank of the Wensum (R10 in this plan) and the May Gurney site on the south east bank of the Yare (in South Norfolk District) which is intended to provide the principal road access into the site via a new river bridge. The development of these three “gateway” sites needs to be approached comprehensively and carefully coordinated in order to overcome significant constraints, maximise the sites’ potential for sustainable economic and physical regeneration and integrate and link them effectively with the surrounding area.

The Deal Ground has been identified for many years as a strategic priority for regeneration, initially allocated in both the City of Norwich local plan 1995 and the City of Norwich replacement local plan 2004 mainly for employment purposes, although limited housing was anticipated in the 2004 Replacement local plan along the northern part of the site.   In recognition of the strategic importance of both the Deal and Utilities sites and their potential for mixed use regeneration of east Norwich, an initial options appraisal was undertaken in 2007. The appraisal set out principles and opportunities for development and took account of a number of detailed evidence studies and the results of public consultation. The government-funded evidence studies prepared alongside and subsequent to the Appraisal included a flood risk assessment, a sustainability appraisal, a contaminated land (stage 1) desktop study, a transportation assessment, an ecological study, a high level archaeological review, a report on title, and a viability review (although these are dated in some respects).

A pre-application planning advice note was produced to provide guidance for potential developers of the Deal Ground and/or Utilities sites prior to adoption of this local plan. This was prepared jointly by Norwich City council, Norfolk County Council in its capacity as the highway authority, South Norfolk Council and the Broads Authority, and was published in 2009 and updated in August 2010. This officer level guidance note brought together former planning policies, guidance, and evidence studies, and has helped inform the development of this policy.

Viability and deliverability are key considerations in the delivery of the regeneration project and individual proposals capable of delivery will not be allowed to prejudice the comprehensive sustainable development of the east Norwich area as a whole.

A revised outline planning application (reference 12/00875/O) for the redevelopment of the Deal Ground and adjacent May Gurney site was submitted to the three relevant planning authorities (South Norfolk and the Broads Authority in addition to the City council) in April 2012. This application was granted outline permission on 12 July 2013, with all matters reserved except access. This proposes a maximum of 670 dwellings (76 of which would be on the May Gurney site and the remainder on the Deal Ground) and a local centre with commercial uses on the May Gurney site.  The applications illustrated a need for any scheme of this size to be able to provide a principal access through the May Gurney site with pedestrian/cycle/vehicular bridge over the River Yare, and a new bridge for pedestrian cycle and emergency vehicular use over the River Wensum to provide connection to the city centre via the Riverside area and the riverside walk extension, eventually also linking to Whitlingham Country Park as a strategic cycle route. Any bridge over the Wensum should demonstrate feasible linkages to the Utilities site.

The site has potential to deliver a new section of the “purple route”; the outer orbital cycle route forming part of the strategic cycle network.  The cycle route should be expanded primarily via the Deal Ground to Whitlingham Country Park and the National Cycle Network route no.1.  Whilst this may be initially via Trowse, proposals should also investigate direct links to the Whitlingham area from the east of the site.

Key development considerations and constraints are:

This site lies adjacent to the River Wensum. A written consent from the Environment Agency is required for proposed works or structures, in, under, over or within 9 metres of the top of the bank of a designated ‘main river’. It is recommended that developers engage in early discussions with the Environment Agency.

The site is in single ownership and has planning permission for 670 dwellings.  Delivery of a comprehensive development will require the close involvement and cooperation of adjoining site owners and constituent planning authorities to overcome identified constraints and mitigate the impacts.

The Deal Ground (8.1 hectares) is allocated for a major residential-led mixed use development to secure the beneficial, sustainable regeneration of this key gateway site on the eastern fringe of Norwich.

(a) a vehicular access road, most likely from the south through the adjacent May Gurney site, via a new bridge over the River Yare, which must be capable of servicing both the Deal and Utilities site;

(b) cycle routes integrating with and connecting to the existing strategic cycle network, a new bus route or routes and a network of attractive and walkable pedestrian routes providing for safe and convenient movement within and between proposed housing areas, retail and community facilities and along the frontages to the Rivers Yare and Wensum;

(c) a bridge connection over the River Wensum to link to the Utilities site, to cater for vehicular traffic including cycles, emergency vehicles, and potentially buses.  This should be in place prior to any substantial development of the site; and

(d) access through the site to the Carrow Yacht Club, so long as it is operational. 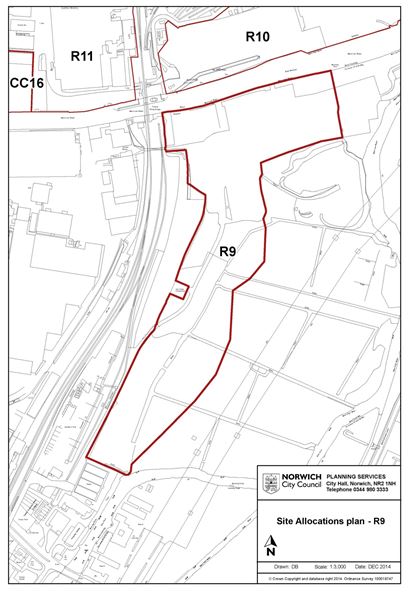